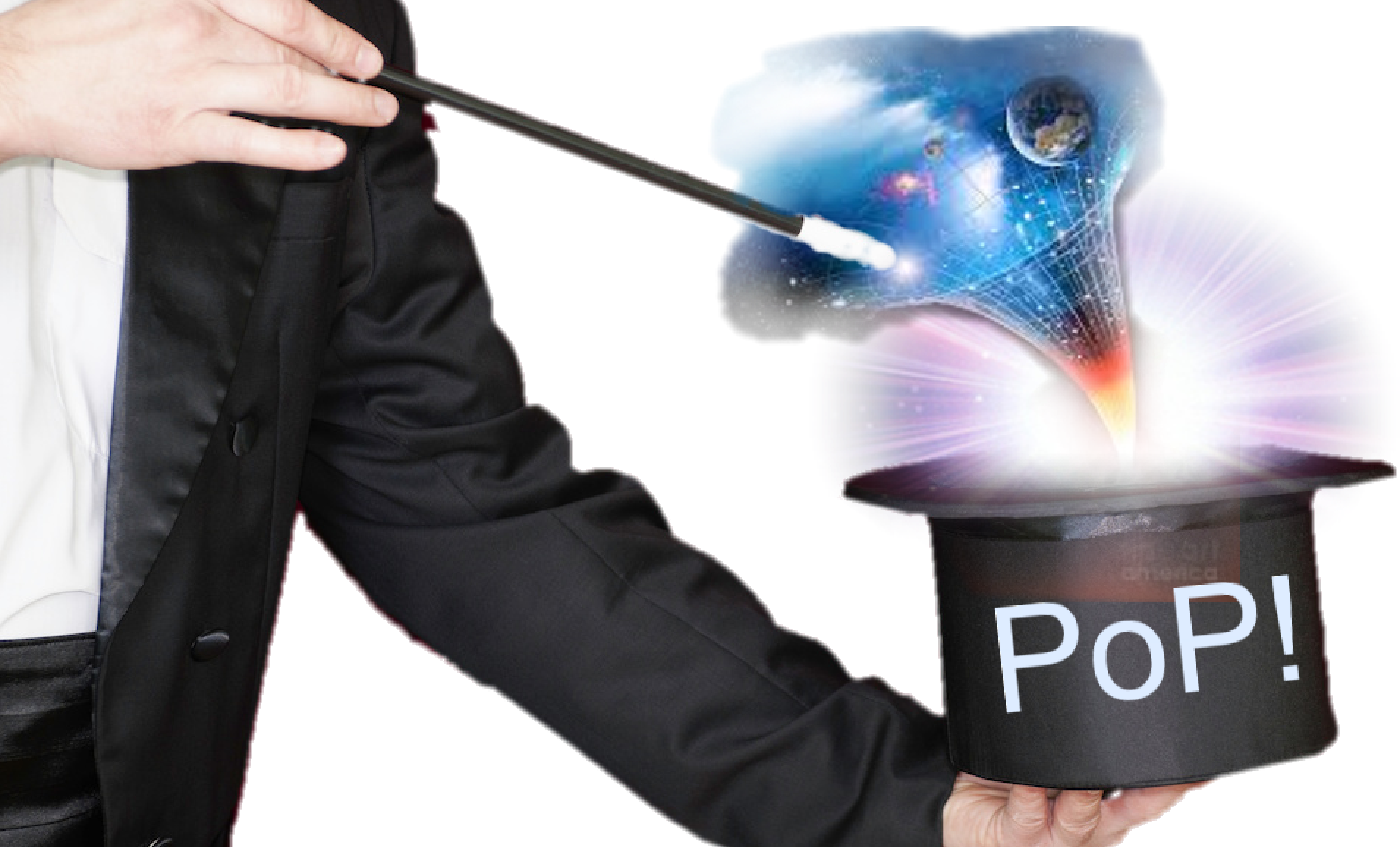 Creating a universe in 3 Seconds from an atom sized speck while breaking all the laws of physics is just pure magic, and they say that is the best theory they have?

The age of the universe does not add up with  the distances of galaxies . The universe is thought to be 13.8 billion years old yet the most distant galaxy discovered so far is 13.4 billion  light years away, So if the universe is said to have expanded in less than 3 seconds at a blistering speed of 8 Billion light years per second. Yea right! that sounds a lot quicker than God's claim of 48 hours to create the universe.... 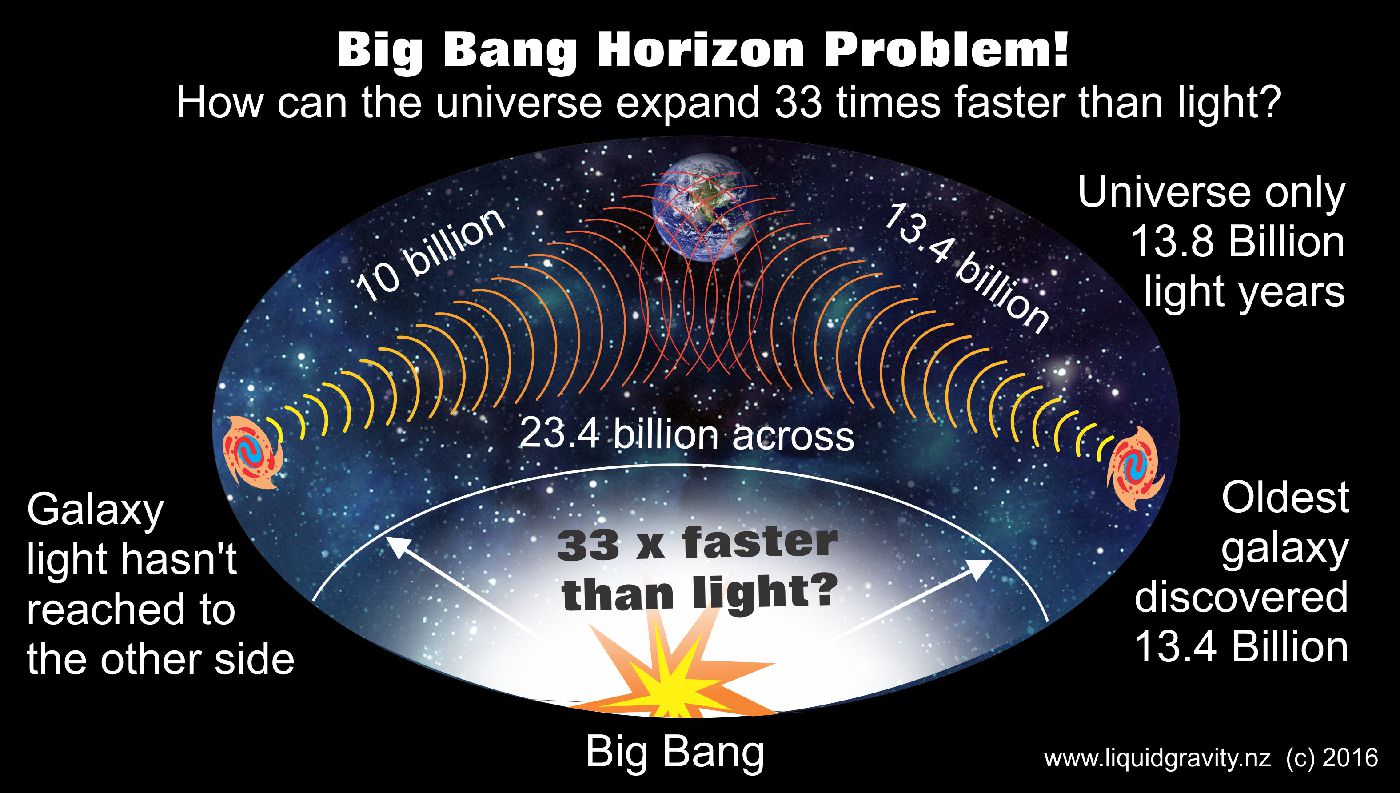 Theoretically the Big Bang will have caused huge temperatures that should have left a uniform hot zone imprinted across the universe, But the temperature map shows heat variations and patterns that don't show a uniform singularity but instead reveal a patchwork of hot and cold splotches that would have more likely come from multiple random explosive events. 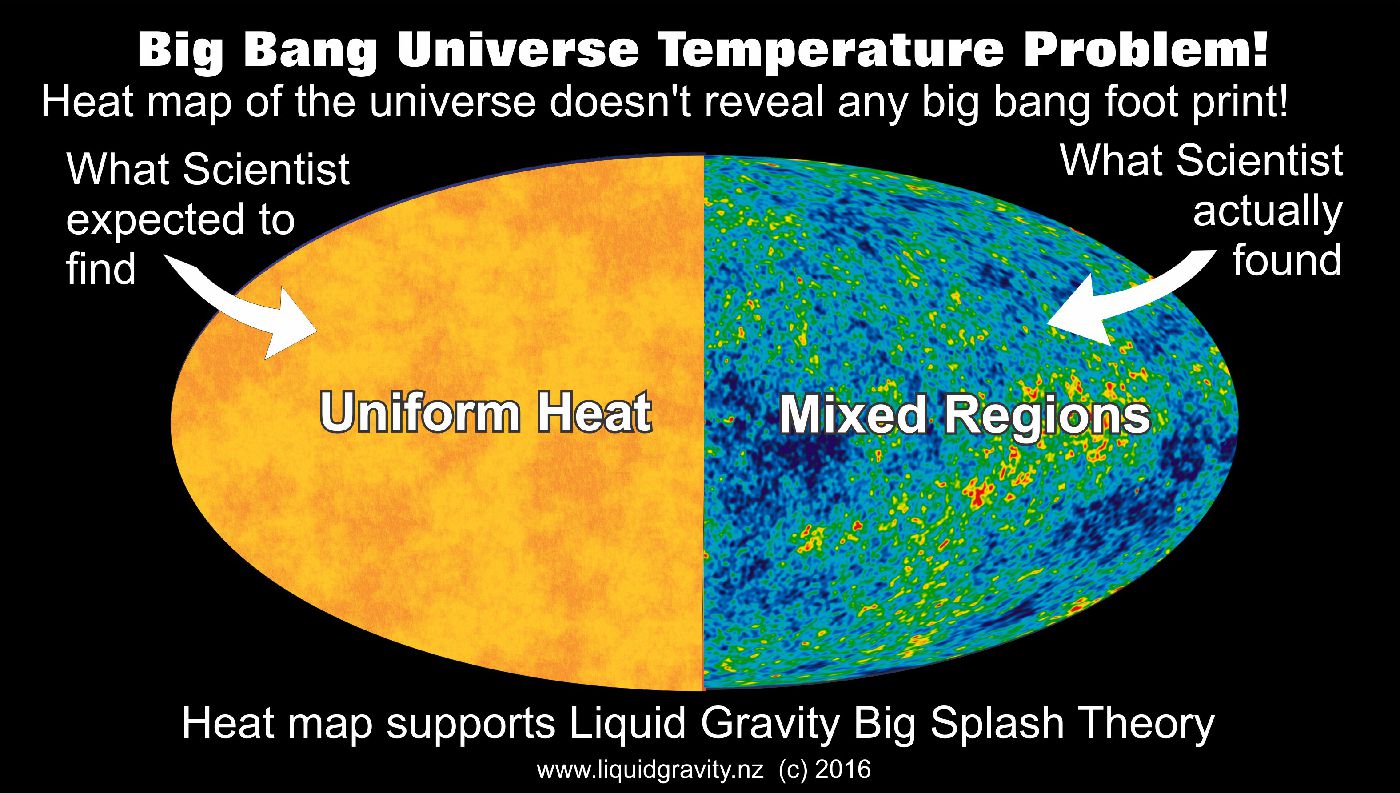 If you run a bath with cold water at one end and hot water at the other end you will have to wait a while before the temperature evens out. This process requires the heat to spread across the bath and the cold to spread back the other way so it can mix together and exchange heat and cold to a point where it is evenly heated. The simple illustration is the same as the universe that had intense heat from the Big Bang and the intense cold from deep empty space before it was occupied. Scientist would expect that the universe hasn't had time to mix heat and cold as it is too wide for light to have mingled. However when they surveyed the sky for the Cosmic Microwave Background in 2013 they found the universe to be evenly heated through out.

To solve this issue scientist have come up with the idea that the universe expanded rather than exploding, like an inflating bubble without a central heated core that allowed heat evenly distribute while it was a relatively small size. Again both possibilities fly in the face of physics, the suggestion that inflation accrued would require some form of inflation force which evenly pressurises a space and causes it to evenly spread pressure and heat. Of course the only thing we know that does that are liquids,liquid air in the case of balloons. But todays scientist don't believe in liquids so what do they suggest caused inflation? Liquid Gravity would agree that inflation was the cause of the expansion of the universe but in a different way.

If the universe started off from the atom sized particle and suddenly popped into existence then it would be expected to have expanded at a very even rate with a huge amount of symmetry or if it exploded then it would have had a defined core and layers of matter radiating out from a its origin point, but no trace of a universe with centre or symmetry or layers!...

The universe is actually a bit of a muddle with no apparent structure with galaxies expanding away from each as well as others crashing into each other. All of which poses problems for the Big Bang theory that originated from a singularity, There is simply too many variables that have created a noise pattern that doesn't reveal an Big Bang origin. The key supporting evidence fro the existence of the Big Bang is that the edges of the universe are moving away, which simply put, if you play that backwards you can assume that they must have expanded from a single point. The evidence doesn't support a Big Bang so what other possibilities could explain the expanding universe? Liquid gravity has a more realistic and physically plausible answer. 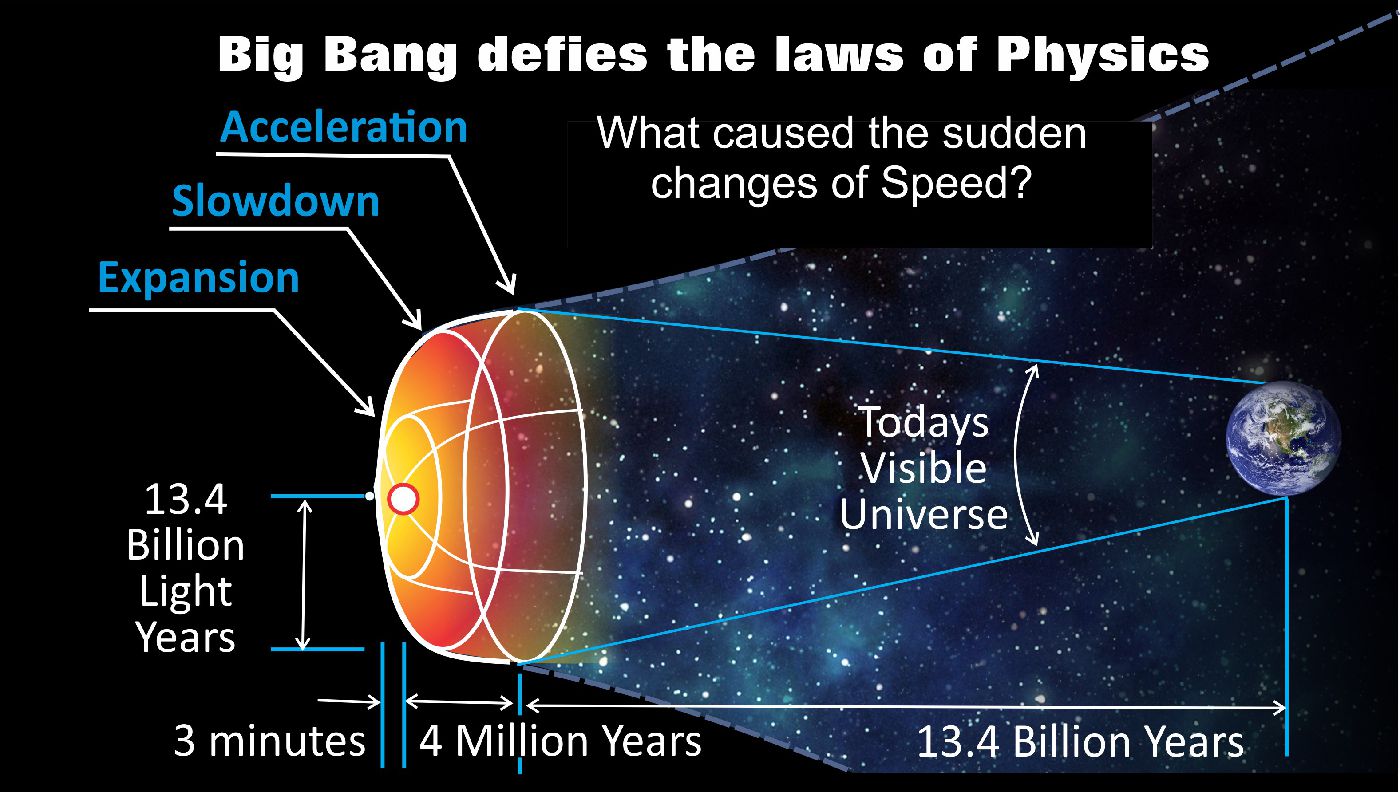 What casued the sudden changes in infaltion speed
-from zero to 13.4 billion light years in under a second,
-then slow down to almost a stop in 3 minutes
-and now accelerating past the speed of light.
These events would require magic becasue no law a physics could acheive these results

What Caused the Big Bang with so much energy and speed?

Scientist have declared they have no idea what caused the Big Bang from its origin as a tiny speck that suddenly expands out into a 27 billion light years across. We can agree with scientist that there is nothing that can explain such a huge event let alone what triggered it.

What huge force slowed the inflation of the universe?

Expanding at 8 billion light years per second then it came to a sudden stop! Science in an attempt to explain the Horizon problem, came up with the idea of inflation to replace the idea of an exploding universe, so they could explain how the universe became evenly heated. However they have managed to create a bigger problem with how did this huge amount of mass all come to a gentle halt.

If you consider Physics, this huge expansion would still be going out into space at the same rate of expansion unless there was an equally huge force apposing the expansion. Then there is the momentum of the objects inside the universe, like a car that suddenly stops will cause the unsecured objects inside it to keep moving. So physics would suggest that all the galaxies would be spattered up against the side of the universe due to inertia of the moving contents. So science has no explanation to the Big Stop, what stopped all that momentum and why everything stayed nicely in its place, maybe no one will notice!

What has then caused the Acceleration, from a virtual stop to an ever increasing acceleration?

Originally science through that gravity would be pulling all the mass of the universe back together, however recent discoveries have found that the universe is expanding and accelerating in the process, no where near as fast as the original inflation process but still faster than light. This again causes problems for Science, suddenly their main piece of evidence about the Big Bang has changed.. They were expecting the expansion to be slowing down after the Big Bang and had predicted a Big Crunch would follow after the big expansion with gravity being the force that would pull the universe back together. But the evidence was showing accelerating expansion which was determined to be Black Matter, something that cant be detected yet pressurises the space between galaxies and causes the universe to expand. Liquid Gravity covered the topic of Dark Matter and explains that it is compressed Aether that results from gravity suction.

Mechanical physics are well understood which shows that an energy force doesn't change direction unless there is resistance.

If the evidence doesn't fit then its time to re-think the whole problem. The Liquid Gravity Big Splash theory doesn't have a single point origin universe but it does have an expanding universe that doesn't defy any laws of physics. 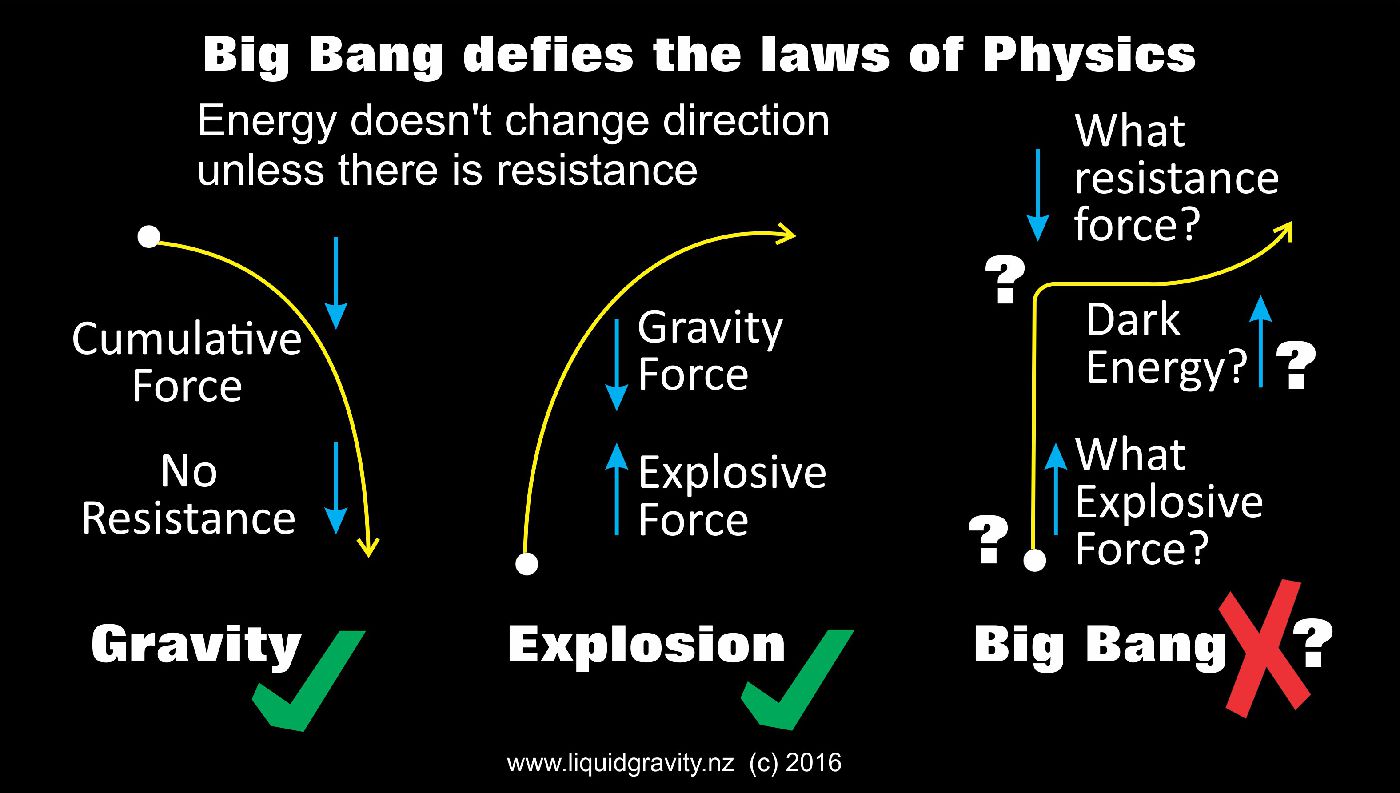 The trajectory of the Big Bang shows huge sudden changes that would require huge apposing forces. There is no evidence of any apposing forces let a lone forces big enough to stop the universe travelling at 8 billion Light years per second. This all stacks yup to show that the big Bang theory is just not a plausible theory.

So what expands, has texture, has uniform temperature, has horizons that fit with its age, without breaking the speed of light! 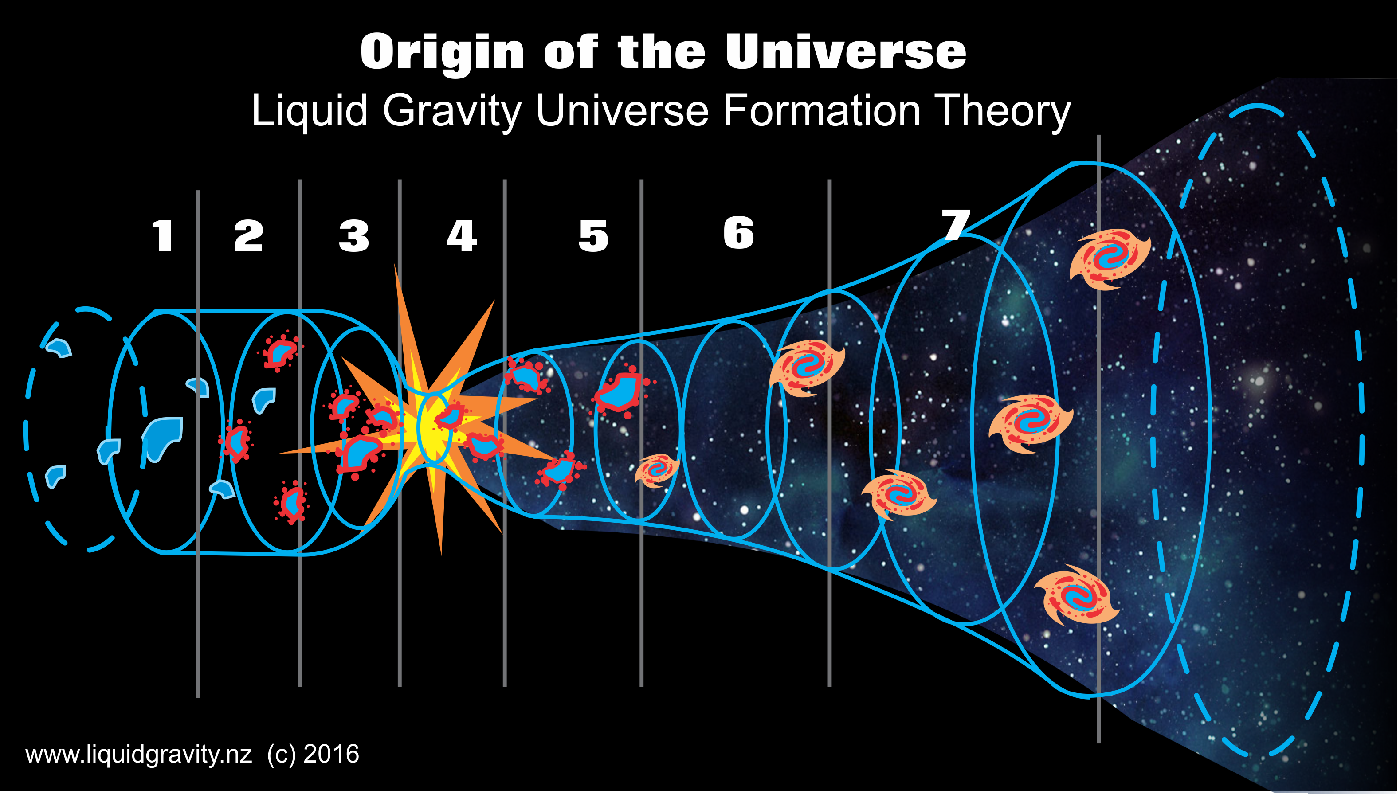 Universal Expansion
The Liquid Gravity model fits all the evidence where Big Bag falls short. Expansion is the key piece of evidence that supports the Big Bang , where as the Steady State universe theory struggles to explain the expansion evidence. The Big Splash theory suggest that expansion is a result of liquid gravity pumping dark matter out into the spaces between galaxies. Gravity was born as a result of Neutron matter meeting Liquid Aether which in the process of time has continued to inflate the universe. (Read More)

Too Big for its Age:

The Big Splash theory doesn't suggest the origin of the universe started from a single point, Rather it suggests that multiple clumps of cold Neutron matter drifted into the our universe sized Aether cloud with various entry points and at different times. This would account for gallaxies forming at each side of the universe with out having to travel from a central point. The distance problem would not be at odds with the age of the universe.

The Big Spash theory suggests the universe is a bubble of Aether inside an ocean of Space Fluid, and just like a bubble there is a boundary between the two fluid states. The subsequent ariavals of Neutron Matter followed by the exsposlive matter expansion and collisions gave birth to gravity and the formation of gallaixies. The random nature of events allowed every corner of the universe to uniformly heat inline with the random patterning displayed on the Cosmic Microwave Background heat map. It is apparent that it displays concentarted hot and cold signatures randomly spread out through the whole sky showing  mutipal events rather than a singulaity. The Big Spash Theory would suggest that the univeres was never a super heated inferno,from a single event and as such it didnt need to cool down  to create the uniformly heated univeres we see today.