'Dark Matter' 'Dark Energy' so named because its invisible, nothing reflects or emits from it so it cant be detected with scientists best efforts. It is estimated to make up 26% of the matter in our universe. Scientists know it exists because it has a measurable affect on our universe. Liquid Gravity suggests that Dark Matter is not so invisible and can explain how it's made and how it works, and best of all how to find it. 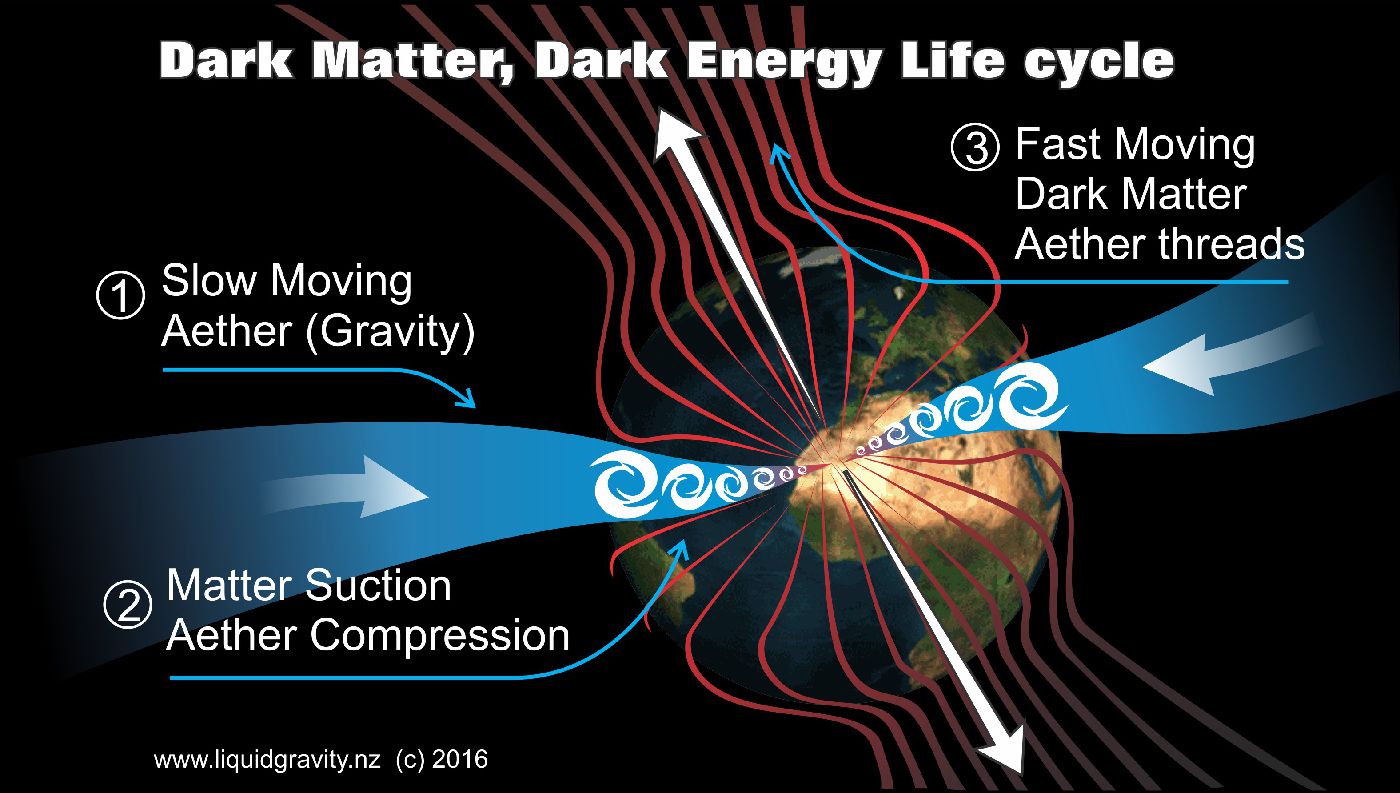 What is Dark matter and Dark Energy?

Scientist are searching for a way to unlock the secrets of Dark Matter, but it just maybe easier than they think? 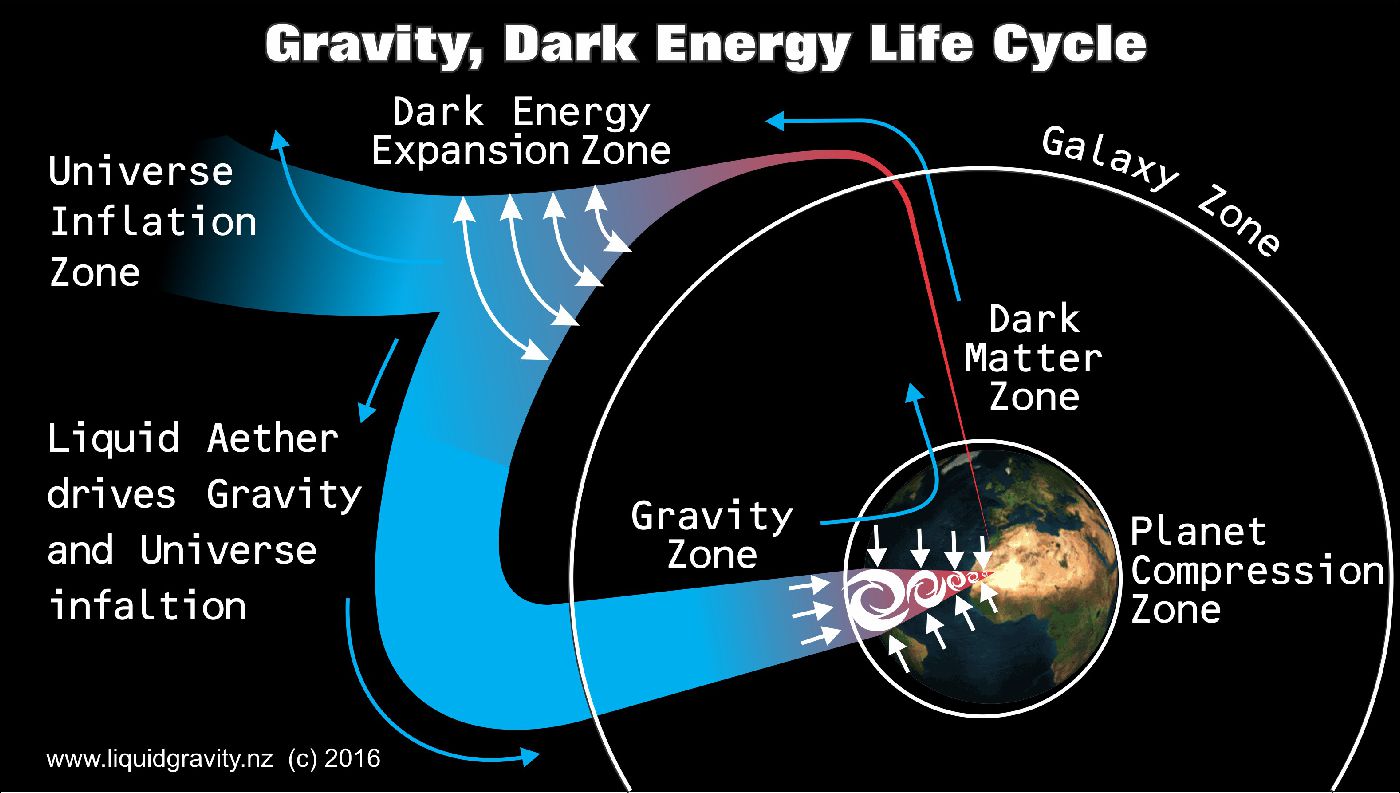 Dark matter is simply the result of Gravitational compression produced by matter. The energy cycle begins by drawing Liquid Aether from outer space, where it is drawn towards matter through hydraulic vacuum pressure. When Aether hits the matter, the atoms slowly compress it as it moves deeper into the core of the planet or star. This compression /suction force builds into an energy "Dark Energy" that needs to be released when it cant go any further into the planet core. The Aether is now highly compressed and moving a lot faster and has formed into tiny threads or hairs as NASA scientists describe them. These threads circuit their way back out from the planet core and into space where they slowly expand and release their energy into the space separating our galaxies. This cycle produces an accelerating expansion of our universe.

Why is Dark Matter and Dark Energy difficult to see or detect?

Dark Matter cant be seen because its not reflecting off anything.

Liquid Gravity theory suggests that light is simply a wave, and not a particle, Light waves propagate through Luminiferious Aether in a wave formation whereas light can also travel through a compressed Aether threads as an energy ball that looks like a particle. Because light is an energy wave or energy ball that is travelling through Aether it can only reflect off atoms and not the conduction fluid that it's travelling through. Scientist are looking for particles that explain Dark matter, but they wont find any as dark matter is just a compressed energised state of Aether. Scientists have been using dark matter without realising it with Photoelectric and Electromagnet forces that really on Dark Matter to conduct electrons through what appears to be empty space, NASA's latest EM space Drive engine is simply a Dark Matter Engine that produces Dark Energy thrust

A new study publishing this week in the Astrophysical Journal by Gary Prézeau of NASA's Jet Propulsion Laboratory, Pasadena, California, proposes the existence of long filaments of dark matter, or "hairs."
This article confirms Liquid Gravity theory with Compressed Aether threads that flow back from planets and stars, back out into space as streams of compressed energy.

Neither dark matter nor dark energy has ever been directly detected, although many experiments are trying to unlock the mysteries of dark matter, whether from deep underground or in space.

Based on many observations of its gravitational pull in action, scientists are certain that dark matter exists, and have measured how much of it there is in the universe to an accuracy of better than one percent. The leading theory is that dark matter is "cold," meaning it doesn't move around much, and it is "dark" insofar as it doesn't produce or interact with light.

Galaxies, which contain stars made of ordinary matter, form because of fluctuations in the density of dark matter. Gravity acts as the glue that holds both the ordinary and dark matter together in galaxies.

According to calculations done in the 1990s and simulations performed in the last decade, dark matter forms "fine-grained streams" of particles that move at the same velocity and orbit galaxies such as ours......" Continue reading article