The Liquid universe concept is an old idea that may still hold the truth about how the universe works. 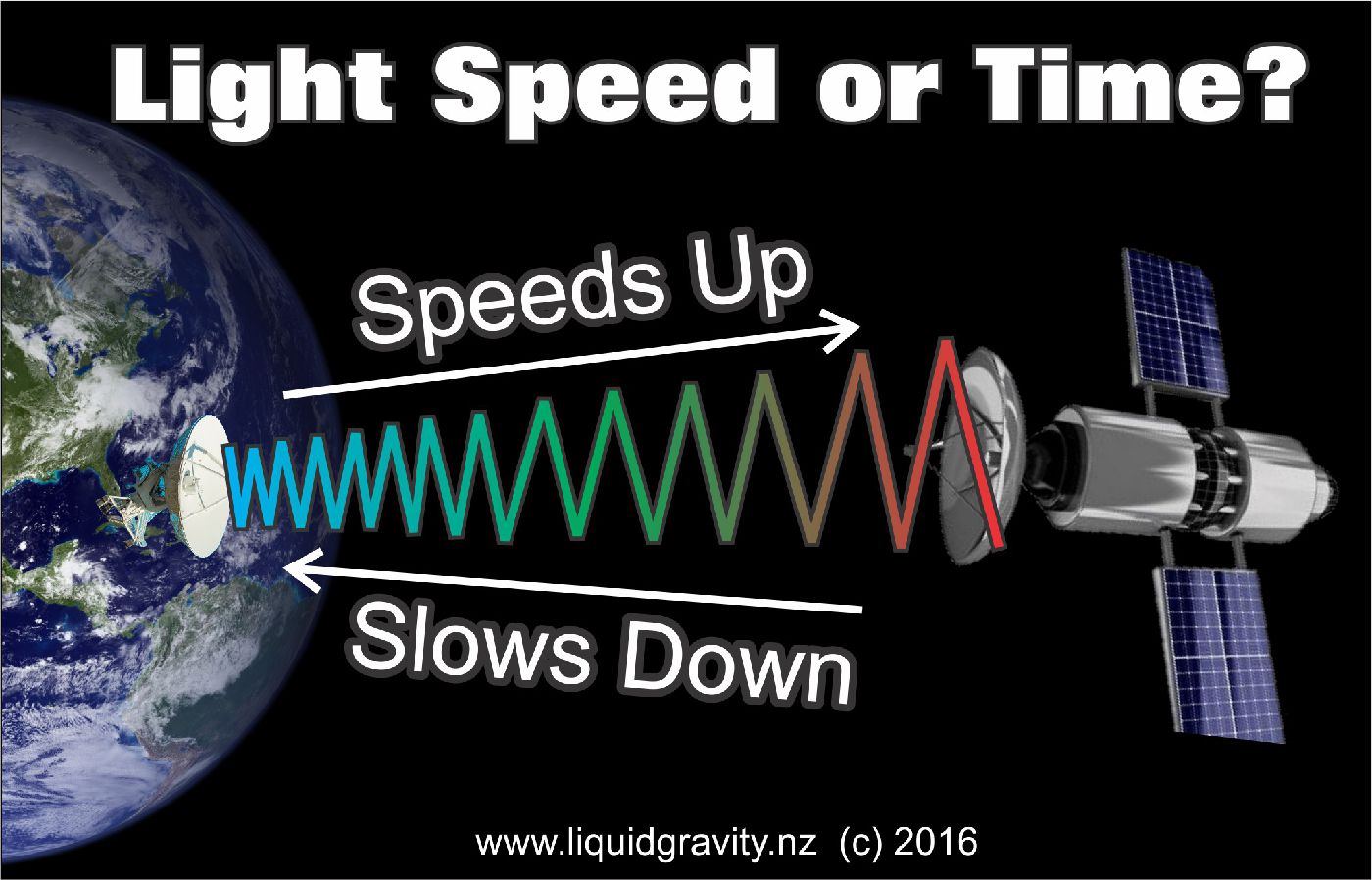 The Speed of Light thought to be a scientific constant.

The speed of light is said to be a constant of the universe at about 300,000 km per second, (299,792,458 metres per second) This numbers is considered to be the speed at which massless particles such as electrons and photons travel through space, so its extremely important as a number used as the basis of modern science. A key property of the speed of light is that it isn't meant to change...even if the light source is moving at speed doesn't doesn't increase the speed of light in any way. While light speed sounds like a very simple concept, it does have complications that appear to contradict the static Speed of light.

Experiments preformed to measurer the speed of light the showed different results in the vertical plane compared to the horizontal plane showing that light speed was affected by gravity. The trouble with this discovery is that light is considered to be a massless particle that shouldn't be attracted to gravity so why do we see gravity slowing down the speed of light? Einstein game up with his theory of Special Relativity in an attempt to answer this light speed/gravity puzzle. His basic solution suggests that Light speed isn't affected by Gravity at all, rather it is time that gravity stretches or compresses which allows the speed of light to stay constant. Modern science has embraced this solution and used it as a foundation to develop space, navigation and communication technologies, so you would have to conclude that Einstein must have got it right,

Liquid Gravity theory would want to challenge this very successful Relativity Theory by swopping the variables. Suggesting that time is a constant and the speed of Light is a variable...

In 1959 the Pound Rebka experiment was considered to be a test that verified Einstein's theory of General Relativity that tests the prediction that clocks should run at different rates at different places. 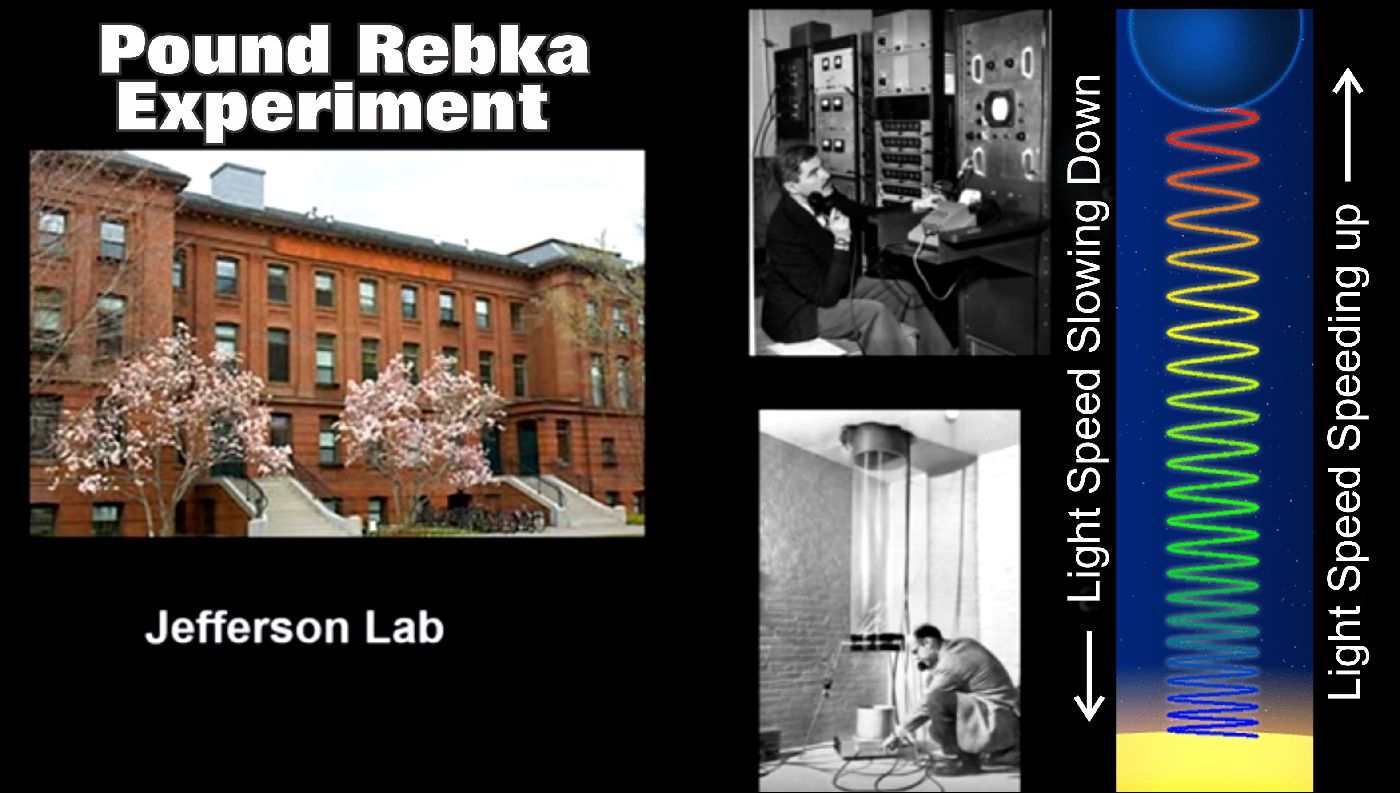 Using a method called Red shift and Blue shift where light spectrums change to demonstrate light speeding up or slowing down. Einstein declared that Light speed is meant to be a constant, so considered that time was being stretched or squashed, Liquid Gravity suggests that Light is speeding up and slowing down and time is constant.

All modern technology relies on Einstein's theory of relativity to calculate the variations in speed of communications from earth to space. This successful technology remains the biggest support for Einstein's theories however the maths still works correctly when you swop the two key variables of Light Speed and Space Time. 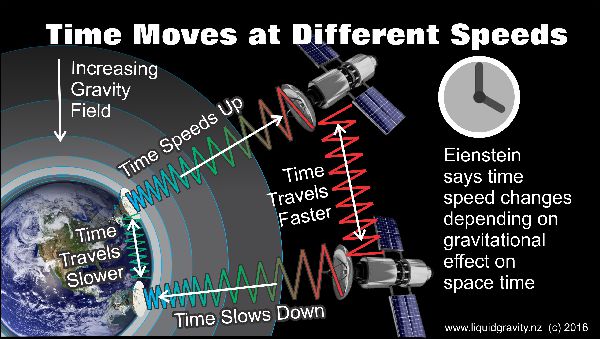 Einstein determined that there is no Luminiferous Aether (Liquid Gravity) and Light Speed is an unchanging constant. So he suggested that the slowing down effect was caused by gravity compressing space fabric which had the result of slowing down time. 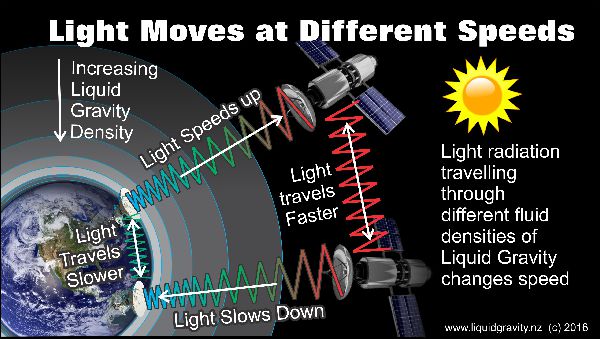 The Experiment to Squeeze time

In 1971 two physicists set out to test Einstein's theory of Time Dilation to see if time could squeeze or expand time by flying around the world in each direction. They used three atoms clocks , one they left on the ground, the others they used to fly in each direction which resulted in the three clocks each showing different times. Did they prove time can slow down and speed up? 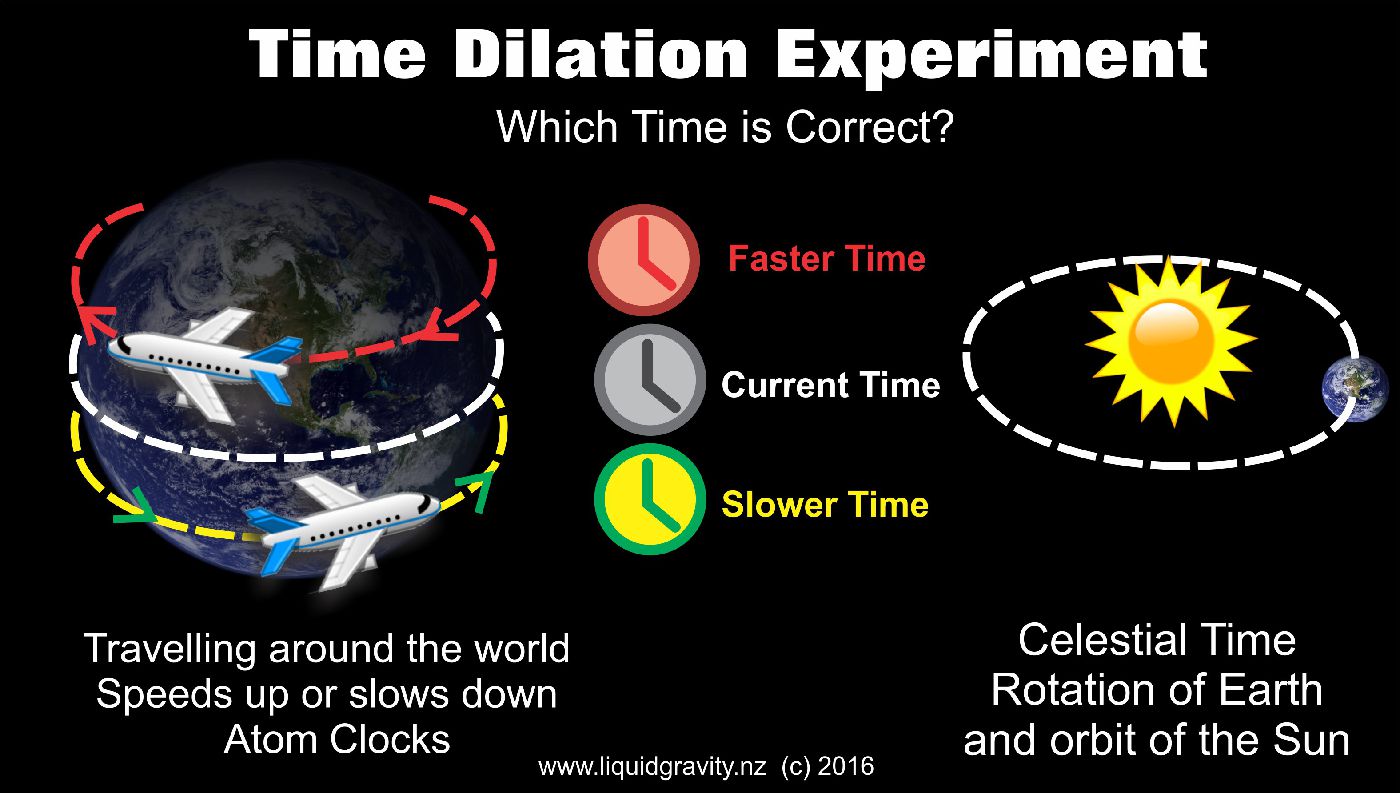 The results of the experiment showed three different times, in one direction time went faster, and in the other direction time slowed down and the clock they left in the same place, remained unchanged from current time. So the Physicist declared that this experiment was solid proof that Einstein was right and that time had indeed expanded into the future and contracted into the past.

Problems with the conclusions

Problem 1: the results didn't change Celestial time which remains the same. So what time did it change?

Problem 2: The other interesting aspect was that each clock could be viewed simultaneously while they existed in different time zones of the past, present, and future.

Problem 3: The Physicist didn't use a mechanical clocks as suggested by Einstein rather they used a clock that uses light speed as its measuring stick, so it could be that this experiment simply proves that Light speed can change by moving in different directions. If they had used a mechanical clock they may have found that time didn't move back or forward because mechanical clocks don't employ light waves to measure with.

Actually there is an experiment called the Sagnac Effect that demonstrates the exact same process with out any claims of time dilation.

The Sagnec experiment shows how light rotation around mirrors in a circle in different directions will produce faster and slower speeds. 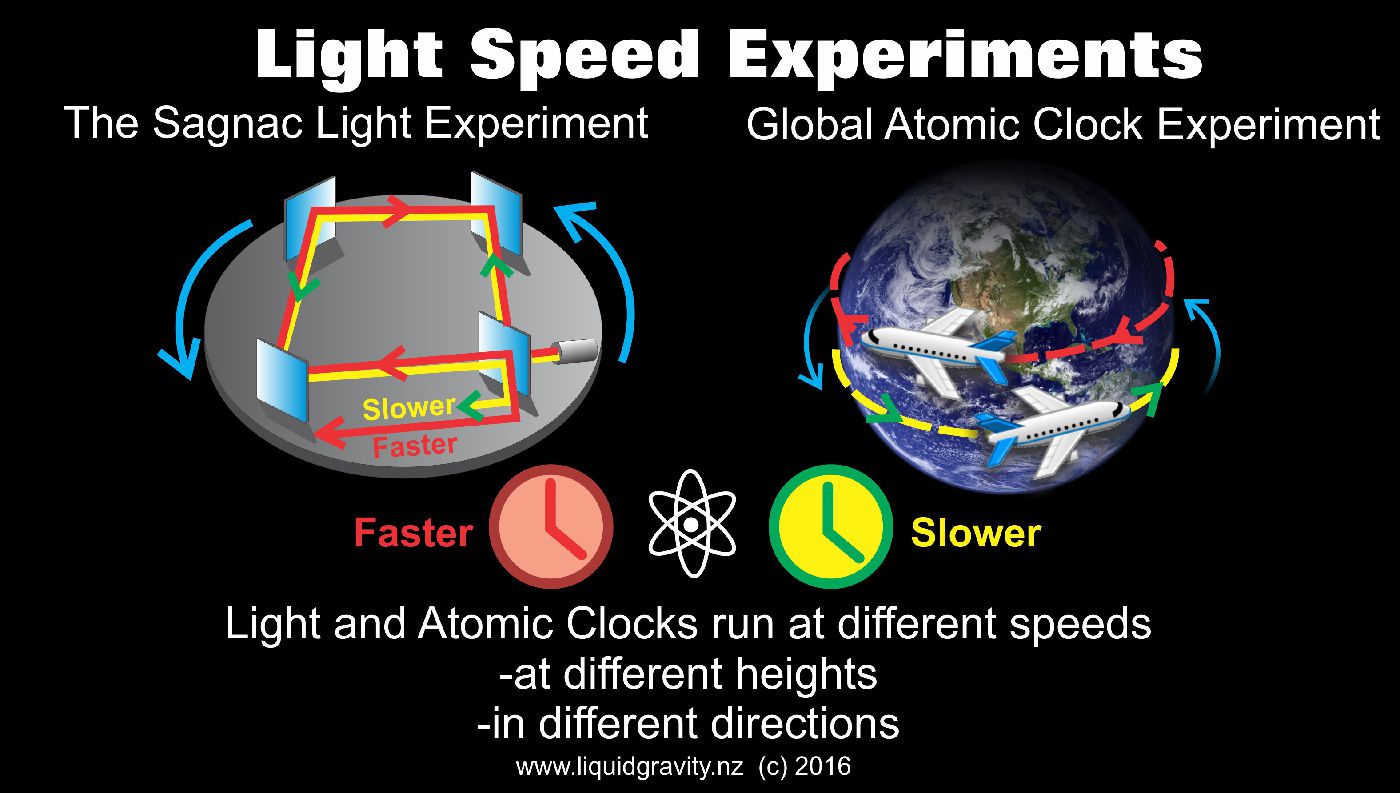 The Sagnac Experiment demonstrates that light moves relative to its local space which would appear to condense or expand time in the same way as the global tests changed the atomic clocks. A simple experiment to prove this point would be to rotate an Atom Clock in one direction for an extended period of time, then rotate another atomic clock in the other direction and you would get different times on each clock as was the case with the Global flight Atomic Clock test.

Liquid Gravity suggests that Aether is the medium that light moves through, so light will behave relative to the state of the Aether. 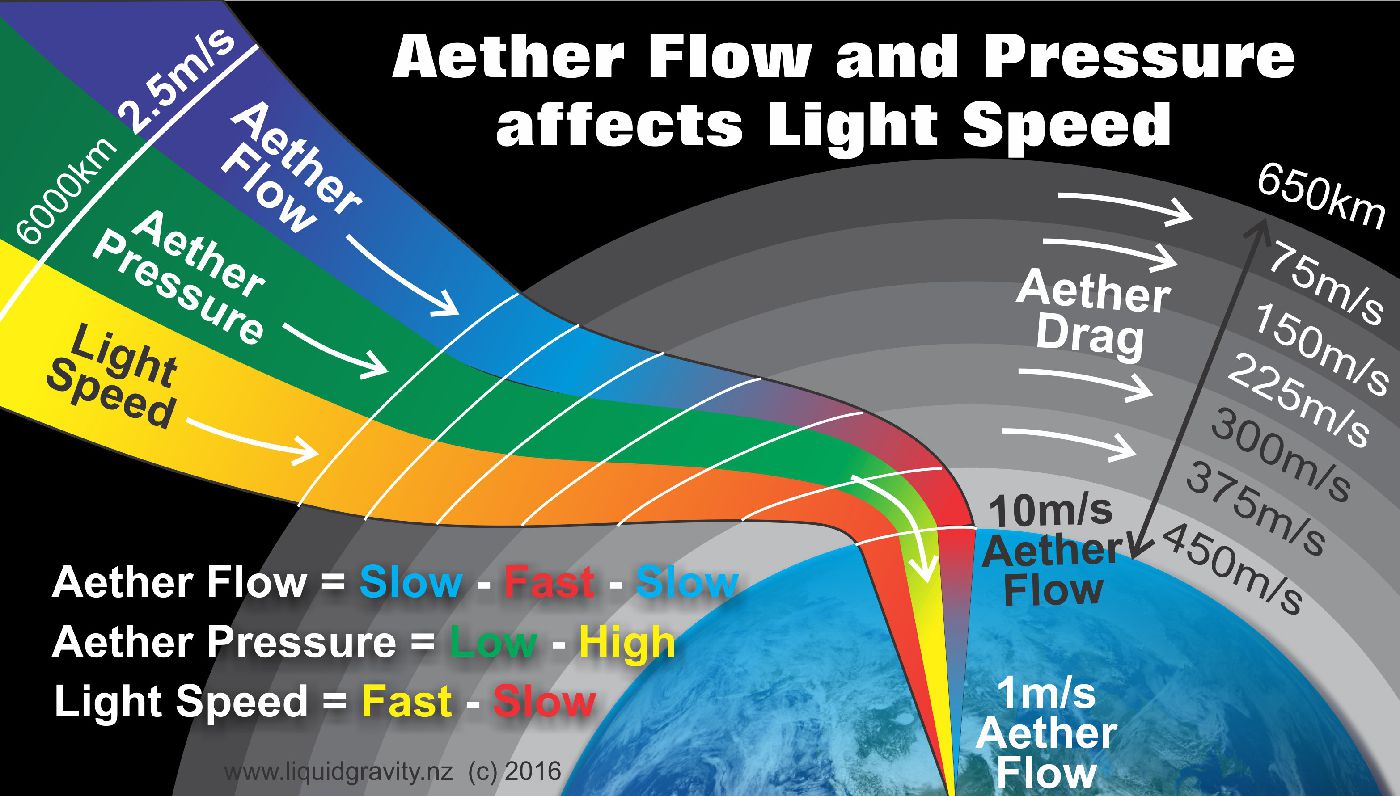 It is created by the suctioning pressure produced from atoms. It produces gravitational force. The flow rate increases as it approaches matter, and reduces as it approaches the centre of the matter. Its peak flow is at the surface of the matter. It has the affect of speeding up light in the direction of the flow by the amount of the flow rate. Aether decreases it's Flow speed by four times each time you double its distance from matter.

Suction produces pressure layers that increase Aether density as it approaches matter, and continues as it approaches the centre of the matter. Its peak pressure is at the centre of the matter. It has the affect of slowing light speed in the direction of the flow as the density increases. Aether increases it's density by four times each time you half its distance from matter.

Aether Drag is produces by the effect of movements of planet rotation and orbiting which rotates at different speeds relative to the movement of the earths surface and its distance out to space. The NASA Gravity B mission has measured 2 meter Frame Drift per year at 650 km. The rotation of the Earth through space is around 450 meters per second or 1670 kilometres/hour at the equator. By dividing this speed over 650 km we can get a rough understanding of the frame shift of Aether drag at various altitudes.

Light Refraction and Aether Drag work together to create the mysterious Stellar Aberration.
Astrologers are required to angle their telescopes rather than point them directly at stars in order to view them. 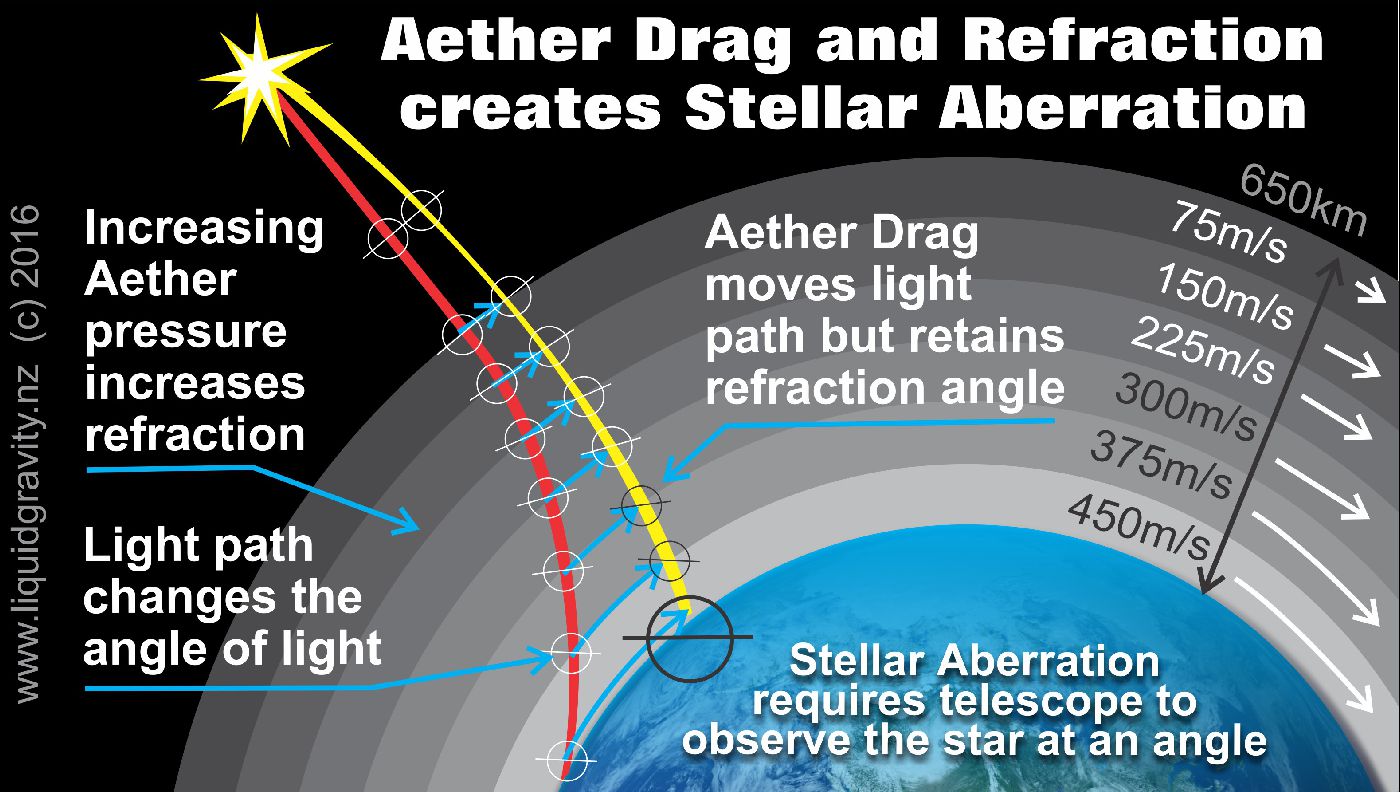 The Mystery of Stellar aberration is not just the fact that stars appear in different visual locations to their actual location, but the big mystery is why are astrologers required to angle their telescopes away from the line of site in order to see the stars they are viewing. The suggested reason is that the earth is rotating and the photon is hitting the earth at an sideways velocity that requires the telescope to be inline, however when you do the maths at of earth rotation 460m per second hitting light travelling at around 300,000 km per second, the angle would be so slight that it wouldn't be noticeable.

Liquid Gravity shows how our planet is surrounded by increasing layers of compressed Aether that has the affect of refracting light. This has the result of rotating the light wave. A further effect is the Aether Drag that is pushing the refracted light path closer to its real position which minimises the distortion of refraction. The Aether Drag doesn't alter the refraction angle of the light wave and so when the Light wave hits a telescope, it needs to be inline with the refracted angle of the Light wave in order for it to be correctly observed through the telescope.

What are we trying to find out? Our key idea is to know the speed of light, is it a constant of the universe or a variable? If light is a variable then the whole of science has to change because everything comes back to the speed of light. These two experiments look at light, gravity and time to test what the variable is 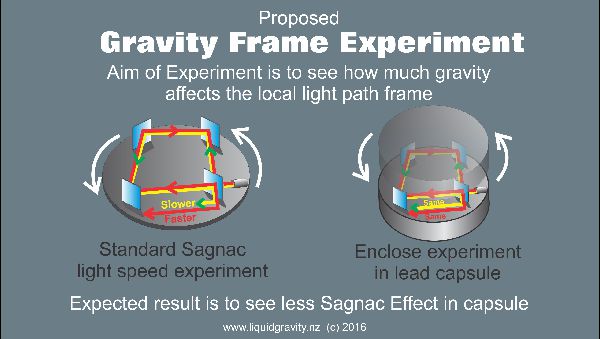 According to Einstein's Relativity Theory Light moves through 'local rest frames' at its constant speed. A 'local rest frame' is best described as the place we are standing which we observe as not moving, but as we know we are all moving as earth rotates at high speed but doesn't alter local time speed. The Sagnac interferometer detects the Local Rest frames as well as a global level. Our experiment is wanting to see if we can make Gravity change the local rest frame from outside the interferometer to become local to the interferometer by adding heavy layers.
What could this experiment tell us?
That small gravity can change the speed of light! 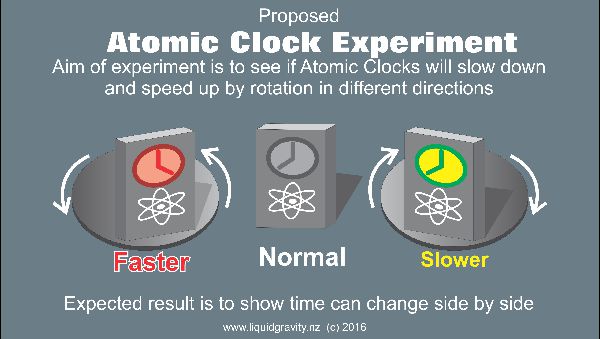 Time Dilation is considered to have accrued when Clocks slow down or speed up which was discovered when atomic clocks were flown around the world. This experiment seeks to revel that its not Clocks slowing down by time dilation, rather its simply the Sagnac effect that is just shortening the atoms circuit in one direction and lengthening it in another direction. This experiment will show that clocks are affected by Light speed variations rather than Time Dilation

6 different ways to discover the nature of Light

Science about the nature of light stems back to just a few simple experiments. 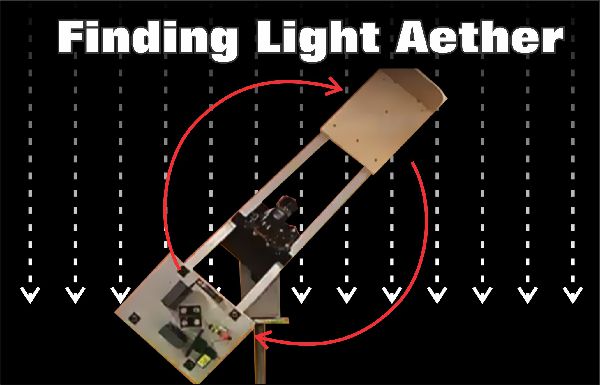 Finding that Light Aether exists is a simple experiment that proves Light is a wave and not a particle. 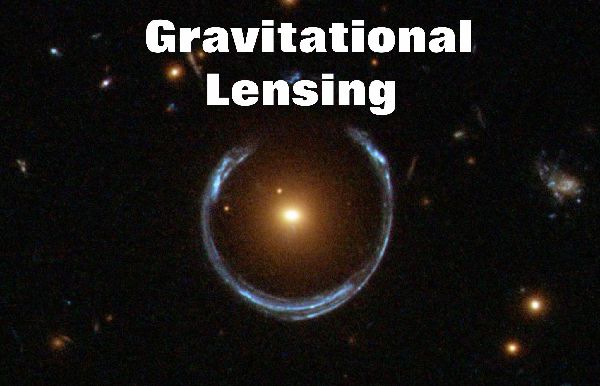 Gravitational Lensing demonstrates the existance of Liquid Gravity with light is being refracted through layers of increasing pressurised liquid  . Aether exists then measuring light speed along its path and comparing it to its light speed across its path will prove Aether is real, so why did it fail? The Photo Electric effect is the mystery of a light wave turning into an electron particle which is the basis of Light Wave -Particle Duality or is it? 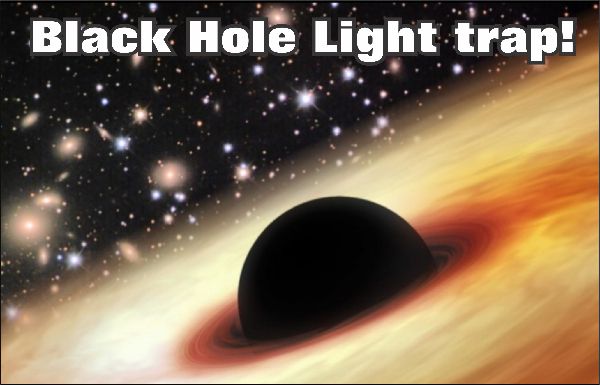 How do Black Holes trap light?

Supposedly Back holes trap light particles due to their huge gravity, but maybe there is another explanation that doesn't break the laws of physics!